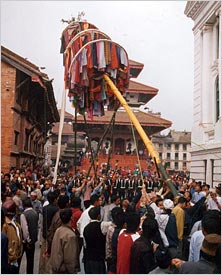 KATHMANDU: Holi, the festival of colours, officially started yesterday with the installation of a bamboo pole decorated with colourful clothes, on the premises of Hanumandhoka Durbar Square in Kathmandu.

The installation of Chir symbolises the tree on which Lord Krishna is said to have hung milkmaids’ clothes while they were bathing in the Jamuna River in northern India.

As the pole is put up in the street at Basantapur, the festivities and worship commences for the week. At the end of which its taken to a bonfire. Though the festival is

celebrated for seven days, revellers usually play with colours and splash water on each other only for the last two days.

In the Kathmandu Valley and the hills, the festival will be observed on Sunday (March 16). In the Tarai, it will be marked on Monday.

Holi is celebrated as a festival of reconciliation as revellers leave negative feelings like anger and animosity aside and put colours on each other’s faces. People from different walks of life, age, and caste enjoy Holi in Nepal with colour, delicious food, music, and dance. Revellers fill balloons with coloured water and throw them at each other. The festival also symbolises the victory of good over evil. The festival falls in late February or in early March.

Named after the mythical demoness Holika, it is a day when the feast of colours is celebrated.

Families and friends get together and celebrate the occasion with a lot of merrymaking. But there is also a tendency to throw water and ballons filled with coloured water to people, who are not celebrating. This causes untoward incidents.