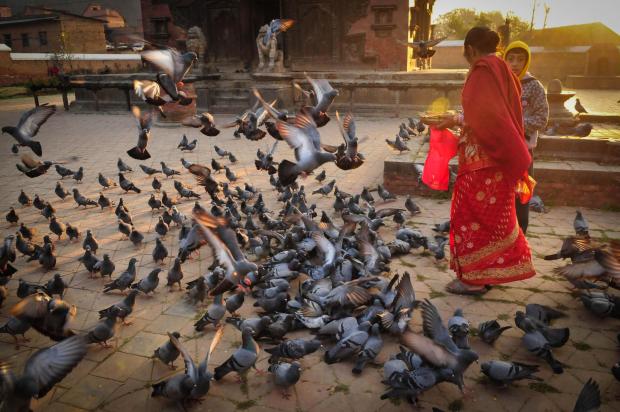 Few of us can forget the harrowing images that flooded the media in the weeks that followed 25 April 2015 – the day a devastating earthquake shook Nepal to its core. Shocking scenes of bodies being pulled from mountains of rubble and centuries’ old temples reduced to dust captured the world’s attention. The tremor, which measured 7.8 on the Richter scale, was responsible for leaving nearly 9,000 dead, 22,000 injured and several million people without homes.

For months the country was in crisis, with food, energy supplies and infrastructure severely affected. Tourism – one of the major contributors to the country’s GDP – collapsed overnight. The impact on more than a million Nepalis whose livelihoods depend on the industry was swift and severe. Travellers stayed away, and not just in the immediate aftermath – the disaster had a prolonged effect on tourism that the country struggled to shake off. Local guides throughout Nepal report being out of work for up to seven months after the quake, even in areas that were far from the epicentre and experienced minimal damage. In 2014, 790,000 visitors came to the country. The following year, when the quake struck, that number plummeted to 539,000 – a loss of almost a third.

Visiting the country 24 months after the disaster, I learn from Suni, my guide in Kathmandu, what life was like in the aftermath: “A lot of foreigners and aid workers came to help after it happened, but tourists were slow to return. Newspapers and TV continued to show photos of the damage caused by the earthquake – even when we were ready for people to come back – and tourists were led to believe that the country was in a worse state than it actually was.”

Despite this bleak period in Nepal’s recent history, things are definitely looking up. Wandering through the heritage sites, I found the pockets of devastation didn’t detract from Nepal’s overall impressiveness. If anything, the loss of historic buildings made me appreciate how precious the remaining temples are all the more. I was struck by the resilience of the people affected by the quake and by their desire to see tourists return – but progress is slow-going in terms of reconstruction.

Kathmandu, the capital, was one of the worst affected areas, with thousands of houses destroyed. Many of these were badly built and home to some of the city’s poorest residents. Two years on, a lot of these people remain in makeshift camps awaiting money from the government so that they can rebuild. Of the billions of pounds in aid provided by foreign governments and international donors to help the reconstruction efforts, a disappointingly small amount has been dispersed in the last two years.

Nowhere in the city are the catastrophic effects of the quake more evident to travellers than in Durbar Square, an Unesco world heritage site home to a wealth of ornate temples, palaces and monuments. Plinths that once held majestic temples like Maju Dega and Trailokya Mohan Narayan now stand ominously empty. Other buildings survived but were severely damaged, including towering Basantapur Durbar, famous for its nine storeys – now reduced to seven. Many structures are supported by wooden planks, some cordoned off behind “danger zone” signs, while crumbled temples bear images showing them intact before the disaster. Wandering through Kathmandu’s most popular attraction it is impossible not to be moved by the sheer scale of the cultural loss.

It’s a similar scene across other world heritage sites in the Kathmandu Valley. Bhaktapur, which is considered the best preserved of Nepal’s three medieval cities, was hit hard. Along with historic temples of cultural and religious importance, a significant number of traditional homes were destroyed, with many of the charming streets changed forever.

Unesco is advising the Nepalese government on how to preserve its precious cultural heritage, working closely with the country’s Department of Archaeology (DoA) – the agency responsible for post-earthquake reconstruction – as well as managing a range of projects directly. Rebuilding and restoration has been frustratingly slow and fraught with difficulties. Christian Manhart, Unesco representative to Nepal, says: “Judging by the meagre progress made over the past two years, the target of completing the restoration of 700 damaged and 133 completely destroyed monuments within five years appears out of reach. The government has recently announced that reconstruction of 20 damaged heritage monuments has been completed and at this pace that only 10 per cent of all those damaged could be reconstructed in the next five years.

“Some international organisations are experiencing the government’s extremely slow permission process, which is required for them to fund and carry out reconstruction work. There are also issues with poor quality of work, caused by the government agencies being required by law to tender projects to the lowest bidding contractors. Qualified engineers and architects are lacking too.”

For some of those who lost homes in the earthquake, the slow progress being made at heritage sites has an unfortunate knock-on effect. In Bhaktapur, restoring these sites has taken priority and it won’t be until this work is completed that attention will be turned to rebuilding homes.

Trekking, the other pillar of Nepal’s tourism industry, has bounced back quicker, despite an avalanche triggered by the earthquake at Everest Base Camp killing 18 people and damaging villages throughout the region. Annapurna, the country’s other famous trekking region, suffered only minor damage and has regained its popularity among trekkers in the last two years.

For all that the struggles have been difficult to shake off, the future looks bright for Nepal as far as tourism is concerned. Last year saw 753,000 tourists return to the country – only 37,000 fewer than the year before the quake. The scars of the biggest natural disaster to hit the country in more than 80 years may be visible for many years to come, but for travellers there still remains an abundance of cultural and natural treasures to enjoy. Having visited many countries where I’ve felt that the locals view tourism as a necessary evil, in Nepal there was nothing but warmth from everyone I met, whether hiking in a remote Himalayan village or on the busy streets of Kathmandu. The nation’s famously friendly people are Nepal’s greatest asset – and that’s something no earthquake can destroy.