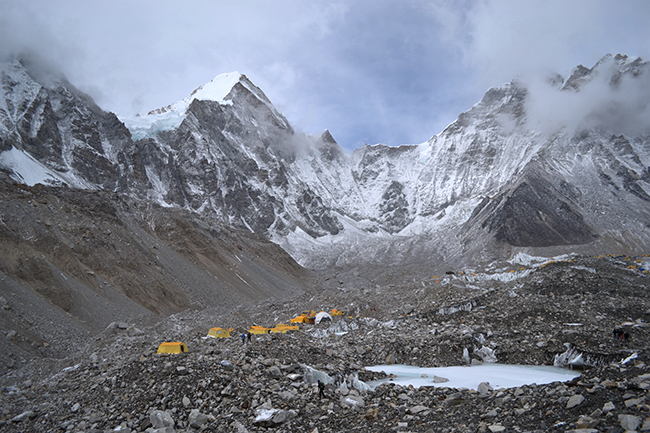 On the morning of April 18, 2014, a massive avalanche roared off the mountain’s West Shoulder and swept down over the Khumbu Ice-fall above Base Camp, killing 16 Nepalese porters. Thirteen of them were ethnic Sherpas, who form the backbone of the Everest climbing industry. It was the worst accident in the history of mountaineering on the world’s highest peak.

A week after the tragedy, a vocal group of young Sherpas shut down climbing on Everest from the south side for the season. All the climbing teams agreed to cease their expeditions out of respect for the lost Sherpas and their grieving families. (However, a wealthy Chinese woman hired a helicopter to lift her and a team of Sherpas over the icefall and was able to make it to the summit from there.)

One might imagine that because of the great loss of life last year, many mountaineers would have second thoughts about attempting the mountain. Ironically, it’s just the opposite. Despite calls to reduce the number of teams and climbers on Everest, Nepal’s Department of Tourism recently stated that more than 350 permits have been issued for the south side of Everest—more than were issued last year before the avalanche shut down the season.

This same contradictory phenomenon occurred a year after the infamous 1996 tragedy broadcast around the world. More than 95 percent of climbers who attempt Everest are guided climbers, and apparently, the more the perceived danger, the more they’re drawn to the mountain.

So the question is: Has anything actually changed on Everest?

“In terms of life insurance for Sherpas, absolutely,” says Jiban Ghimire, managing director of Shangri-La Nepal Trek, one of the major Everest outfitters in the country.

In the aftermath of last year’s accident, a coalition of Sherpas and Everest outfitters presented Nepal’s Ministry of Tourism with a 13-point list of demands. At the heart of the petition was a request for a large increase in life insurance payouts for high-altitude porters who die while working on the mountain. Prior to the 2014 avalanche, families of Sherpas who perished on Everest were usually given about $5,000.

“The government met the primary demand of the petition, and all high-altitude porters are now covered by a $15,000 policy,” says Ghimire.

He also notes that the families of the Sherpas killed last year each received that amount from the government but that additional donations from wealthy client climbers, international organizations, and other sources boosted the total that the families received to more than $25,000 each.

Efforts to educate the children of the deceased have also increased. The Nepal Mountaineering Association, in partnership with the Himalayan Trust, has promised to pay to educate, through high school, all of the children who lost their fathers.

The mountaineering outfitter Alpine Ascents International, through its Sherpa Education Fund, founded in 1998, enlarged a school in Namche Bazar to include a nursery as well as kindergarten and first-grade classes.

“We’ve been sponsoring the education of Sherpa children down in Kathmandu for years,” says Gordon Janow, Alpine Ascents’ director of programs, “but we’re hoping to improve the educational infrastructure enough to attract good teachers into the Khumbu region, so the students don’t need to leave their families. We want Sherpas to have the opportunity to become doctors and attorneys and pilots, not just high-altitude porters.”