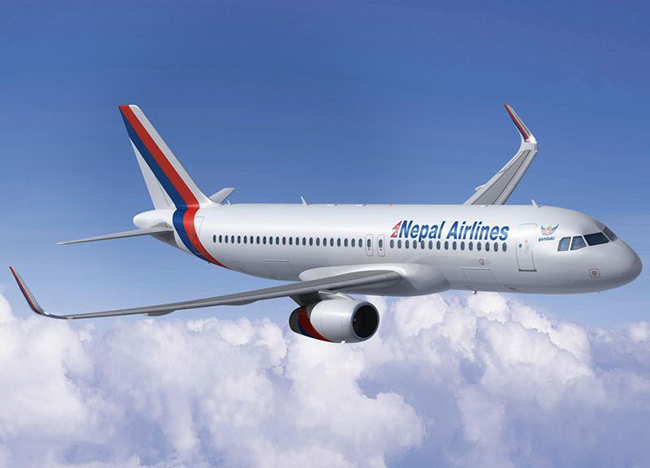 KATHMANDU, Nepal – Nepal Airlines Corporation (NAC) has said it plans to resume services on the Kathmandu-Delhi sector in mid-March with at least two flights daily.

NAC said its new Airbus A320-200, which is in the final stages of completion, would be flown on the Kathmandu-Delhi sector first. The carrier recently issued a notice to appoint general sales agents (GSA) in Delhi.

Similarly, NAC said that the frequency on the Kathmandu-Kuala Lumpur sector would be doubled to 14 flights weekly as soon as the new planes arrive. NAC has ordered two new Airbus A320 jets, and the first one is expected to arrive in Nepal by February. It currently serves the international sector with two ageing Boeing 757s.

“We have accorded high priority to the Delhi sector as travel demand has increased tremendously. That’s why we have planned to operate two flights a day on this sector,” said Madan Kharel, managing director of NAC. “We have also planned to resume flights on the Kathmandu-Bangalore sector after a long break.”

Travel agencies said airline ticket prices increased dramatically immediately after NAC suspended its operations on the sector.  A one-way ticket on the Kathmandu-Delhi sector that costs Rs 12,000 to Rs 13,000  was priced at Rs 40,000 during the September-November peak season. Ticket prices of budget carriers jumped to around Rs 30,000 from the normal Rs 12,000.

Last year, NAC formally ceased its Kathmandu-Delhi services due to lack of planes. On March 14, 2013, NAC headquarters in Kathmandu notified its regional office in India of its decision to suspend its Delhi operations.

Meanwhile, Kharel said that NAC would station only two employees in Delhi for monitoring work after a GSA had been appointed. Before the suspension of the Delhi flights, NAC had 85 employees at its Delhi office with their salaries and perks resulting in a massive drain on its resources. “As there won’t be a big financial burden on the sector, NAC should be able to offer a one-way ticket for Rs 12,000,” Kharel said.

Appointment of NAC board members stayed

The Supreme Court has issued a stay order against the Tourism Ministry’s decision to appoint a new board of directors at NAC.

Subsequently, two of the ousted members filed a writ at the court stating that their tenure had not expired.