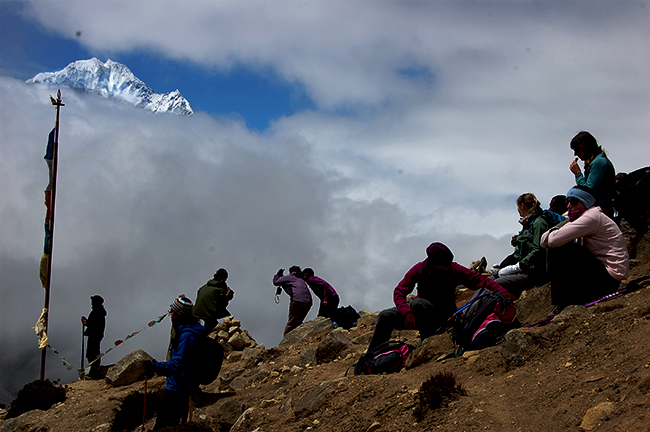 Kathmandu – Nepal cuts Mount Everest climbing rates.The cost of climbing Mount Everest on its Nepal side has been cut by more than half in a bid to tempt back visitors. Numbers have fallen after a number of fatalities and an unprecedented shutdown of Everest, after Sherpa guides refused to climb it in the wake of an avalanche. Nepal has introduced new safety measures but some mountaineers fear that Everest is already too overcrowded during climbing season.

Nepal is slashing the climbing fees for Mount Everest to attract more mountaineers to the world’s highest peak, despite concerns about the environmental and safety implications of more climbers joining the thousands who already crowd the mountain in high season.

Madhusudan Burlakoti, head of Nepal’s department of mountains, said on Friday that from next year licence fees for single foreigners will be cut from $25,000 to $11,000 (£6,500).

Similarly Nepal Mountaineering association cut off their control peaks. The new rate will  be as follows:

Royalty for Foreign Climber per person in US dollar

As per the decision of secretary level dated 2071/1/16, the insurance amount for sardar,mountain guide and high altitude walker fund is fixed as Rs 15 lakhs.Similarly, medical insurance is fixed as Rs 4 lakhs.

Note : Maximum number of members in a team is 15.

Garbage deposit to acquire climbing permit will be same  i.e. USUSD 250.00. The refund shall be made as per the provisions of NMA.