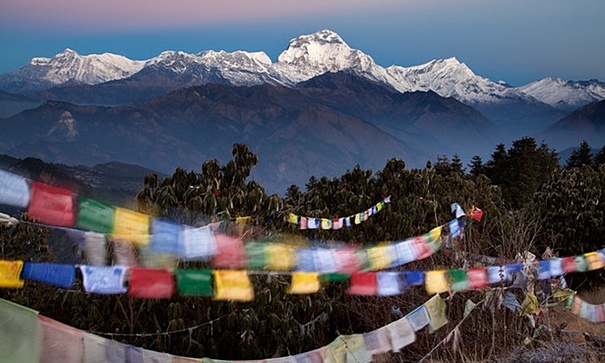 Whether recent events in Greece, Tunisia and even Calais have a long-term impact on tourism, beyond the immediate effects of changed and cancelled bookings, remains to be seen, but there is no doubt that the 7.8 magnitude earthquake Nepal suffered on 25 April, and its severe aftershocks, served a crushing blow to the country’s industry.

Yet already, just two months later, Nepal is gearing up to tell the world it’s back in the travel business. Nepal’s government is desperate to change the narrative after April’s disaster, which killed almost 9,000 people, in time for the peak tourist season in October and November. Visitors bring in $1.6bn to a poor country whose economy has been recovering from a decade-long civil war (1996-2006).

Despite a severe travel warning from the Foreign and Commonwealth Office (FCO) having being in effect – though as of 3 July the FCO no longer advises against all but essential travel to the whole of Nepal – many leading adventure travel companies are planning to return in the near future, including Exodus andG Adventures. Fiona Marshall of KE Adventure Travel says: “We’ve decided to operate in Nepal this autumn. Bookings are slow, but that’s natural. Many of our clients have been to Nepal before and are keen to go. We’re speaking to people in Nepal every day, and we know the country’s getting back to normal.”

Half a million people in Nepal work in tourism, more than half of them women, and the World Travel and Tourism Council says that figure could have risen to 700,000 in the next decade. But a recently published post-disaster report commissioned by the government shows tourist numbers fell by 90% after the earthquake. It warns that the Nepali tourism industry could shrink this year by 40% from 2014 levels. There are fears that if visitors stay away more young people will be forced to leave the country to look for work elsewhere in Asia and in gulf states like Qatar, where migrant workers face abuse.

The FCO’s initial travel warning made it difficult for tourists to find travel insurance for Nepal. Shiva Dhakal, the owner of Royal Mountain Travel, one of Nepal’s biggest travel agencies, says: “Travel insurance is the major problem for us right now. Because of the negative travel advisory [previously] given by the UK government, travellers from the UK are scared.” The Guardian contacted 10 adventure travel insurance agents last week; all of them said they wouldn’t currently cover Nepal, though the British Mountaineering Council (thebmc.co.uk) is offering insurance for trekkers, including to Kathmandu, though only on a case-by-case basis to the most affected areas.

Nepal’s tourism industry is trying hard to reassure potential visitors and their governments. Hotels in Kathmandu have been surveyed, with 90% cleared to operate normally, including hotels in heritage buildings, like Patan’s recently restored The Inn. Several trekking agents have already carried out their own surveys while the Nepali organisation Samarth, funded by the UK’s Department for International Development, has commissioned a report from specialist earthquake engineering firm Miyamoto to assess Nepal’s two most popular trekking regions, Annapurna and Everest. That report is due in the middle of July. Post-disaster reports suggest 150km of tourist trekking trails suffered significant damage.

While trekking and other adventure activities account for 40% of Nepal’s visitors, the remaining 60% come for the stunning cultural and religious heritage, which was badly damaged during the earthquakes. Almost all the World Heritage Sites in the Kathmandu Valley have now reopened despite strongly worded concerns about structural safety from Unesco itself.

Thomas Schrom is an Austrian conservation architect with 20 years’ experience in the Himalayas, having worked on the stunning Patan Museum, one of the finest in south Asia, housed in the exquisite Malla-era Keshav Narayan Chowk palace. “Here in Patan, it really doesn’t look too bad,” he says. “The collapsed temples have been cleaned up and the remnants stored. The square is open to visitors and so is the Patan Museum.” Recently developed methods for seismic strengthening, he says, have made a big difference.

Other famous sites in the valley, including Kathmandu’s Durbar Square and Swayambhunath, known as the Monkey Temple, fared worse; these are the places Unesco has singled as being of most concern. A safer option is to join the crowds of Tibetans and Sherpas at the vast stupa at Boudha in the east of the city, spinning prayer wheels at dusk. The only one of Kathmandu’s World Heritage Sites still closed is the temple complex at Changu Narayan.

Schrom, who has prepared a post-disaster assessment for Unesco, says more than 700 listed structures have been damaged, a fifth of them destroyed completely. The Department of Archaeology says it will need at least $100m to restore Nepal’s cultural heritage in the Kathmandu Valley and other affected districts but Schrom says that figure is an underestimate. Sites like Bhaktapur, the third of Kathmandu’s famous palace squares, will come back better than ever – and earthquake-proof. “What breaks my heart,” Schrom says, “are all the sweet little temples and houses in the back alleys that will be lost forever.”

Nepal has a reputation for being the ultimate destination for the adventurous and, as Gordon Steer says: “There’s always some risk attached. But the country has the biggest, most exciting mountains in the world coupled with the most wonderful culture. The people you meet along the way are incredible and you learn so much. It’s the best trekking on earth.”