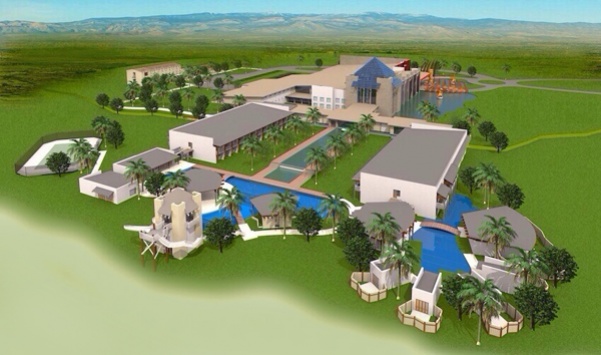 Kathmandu – At its prime time, Nepalese Tourism Industry welcomes another big foreign investment in Madigram – Rupandehi as a 5-star resort is under construction.
Hong-Kong based multination company Silver Heritage is tying its chain-commerce in Nepal with the estimated budget of USD 34.8 Million. Resort is expected to roof 200 deluxe rooms.
“Country has seen its biggest flip in the tourism industry, and to support and boost the country’s economy, we have initiated to run this resort”, says Rajendra Bajagai who is the responsible personnel of Silver Heritage for Nepal.
He said that construction was located between Bhairawa and Butwal, Madigram. Resort would build in 6.4 acre land where the building part would be covering only 13% of the total land. However, at early phase only 100 rooms will be commercialized.
“At the end of December 2016, resort will start functioning and we are working to achieve this goal,” Bajagai adds. “Resort will facilitate as it has to be in any other 5-Star hotels.”
There will be 14 deluxe rooms attached to swimming pools, respectively. This is the only hotel or resort in Nepal attributed to this grand facility, proclaims Bajagai. Rate might touch up to USD 200 per night, excluding 10% service charge and 13% total VAT.
One of the highlights is resort shall be operating Casino with the capacity of 700 players at a time. Including Casino and Resort, approximately 1,200 job employments will be introduced.
Resort will be donating 2% of its total income to ‘Tiger Preservation’ campaigns. This is a reason which is accountable to name resort into ‘Tiger Palace’ as to express their concern towards endangered species. Resort will also be co-operating with nearest community forest organizations.
Tiger Palace will be chained under Silver Heritage who will also be responsible for the management operations. Silver Heritage has other chain hotels in countries like Laos, Vietnam, Philippines, and Cambodia. Tiger Palace will be offering Spa, Tennis Court, Children parks along with Water Fun-Park, and other recreational facilities.