As Bode, a sleepy village in Bhaktapur district, prepares to celebrate Bisket Jatra during the first two days of Nepali New Year, Juju Bhai Basan, who has to pierce his tongue with a metal skewer on the second day of the festival, is growing restless.

Though he has done it in the past, Juju Bhai is still scared of the 13 inch metal skewer that will dangle from his tongue as he walks across Bode for more than three hours carrying Mahadip, a heavy structure fashioned out of wood and bamboo with several burning torches attached to it.

“I am yet to get over the fear,” says the 32 year old fine arts teacher. “As Bisket Jatra nears, I recall the pains I have suffered in the previous years.”

While walking with his tongue out, Juju Bhai is not allowed either to swallow anything or spit out. When his mouth dries, his associates put a few drips of pure oil into his mouth. Saliva constantly drips out of his mouth and off his cheek and every few minutes his associates wipe saliva off his chin. “It´s very annoying,” he says. “But I will have to do it anyway. The tongue-piercing ritual is a matter of pride for Bode and I cannot let my village down.” 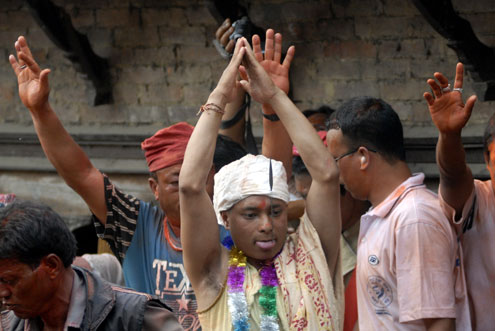 Juju Bhai says the pain that the piercing of the metal skewer inflicts on his tongue is quite intense. “It hurts,” he says. “But, I somehow tolerate it. More painful, however, are the ensuing hours when I have to pass through the village carrying the Mahadip. People keep throwing coins toward me. And, if a coin hits the metal skewer in my tongue, I feel terrible pain. I feel like crying.”

Apart from the ordeal of the piercing and walking barefoot for hours, there is something that Juju Bhai is more afraid of.

“I know I would be the center of attraction during Bisket Jatra,” he says. “I have a huge responsibility to shoulder and if anything goes wrong during the ritual, failure would be mine. This is what bothers me the most.”

If blood drops off his mouth while inserting the metal skewer into his tongue, it is considered bad omen. Juju Bhai is always too conscious about this. “If blood drops, the villagers will get disappointed,” he says. “When I think of it, I feel more frightened.”

This is the fifth time that Juju Bhai is getting his tongue pierced as part of Bisket Jatra. Until four years ago, he had no idea that he would be the focus of the grand festival he grew up enjoying as a mere onlooker.

In 2065 BS, Buddha Krishna Baga, who had pierced his tongue for four consecutive years before Juju Bhai, lost his mother. As he had to abstain from all festivals for a year to mourn his mother´s demise, Baga could not be asked to enthrall the participants of Bisket Jatra.

As no one else was ready to fill Baga´s shoes, Bode´s biggest festival faced a serious crisis. Without someone ready to get his tongue pierced, Bisket Jatra would have become a dull and meaningless fare. The elderly of Bode anticipated an imminent end to their centuries-old tradition.

That was when Juju Bhai stepped forward to save Bode´s rich tradition. “It was an emotional decision,” recalls Juju Bhai. “I am proud of the tradition and could not let it end just like that.” 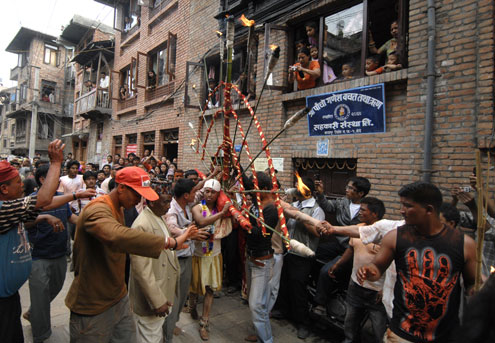 Before deciding to be part of Bisket Jatra, Juju Bhai consulted his elder brother and friends. His friends encouraged him, so did his brother, but they did caution him about the enormity of the burden. “Being the central part of Bisket Jatra is not an easy task,” he says. “In addition to the physical and mental ordeal, I would have to feed hundreds of people as well. Yet, I was undeterred. I am proud of my decision now.”

On April 10, four days before the Nepali New Year 2070 BS, a small congregation of religious leaders of Bode will formally consign Juju Bhai the task of getting his tongue pierced. After that he cannot escape the responsibility under any pretext.

Come what may, Juju Bhai must enthrall thousands of people who flock to Bode to celebrate Bisket Jatra on the second day of Nepali New Year (April 15 this year). “Whether I fall sick or someone dies in my family, I must fulfill my duty,” says Juju Bhai. “There is no escape.”

The congregation comprises of Pradhan Naike or the village head, Karmi Naiki or the priest who pierces Juju Bhai´s tongue, Bhansali or the main priest of the festival and Maila Pama or the one who worships seven different gods and goddesses during the festival. The delegation is the supreme authority that approves the man for having his tongue pierced.

“If any one dies in my family before the delegation arrives, I can be excused,” says Juju Bhai. “But after they anoint me, there is no way out.”

The fact is that Juju Bhai is unlikely to be replaced by any other person for many more years to come. “I would be more than happy if any one is willing to take on the role,” he says. “But I will continue the tradition so long as there is no one to replace me.”

With Bisket Jatra approaching, Juju Bhai has started walking around barefoot in the morning. “I have to prepare myself mentally, too,” he says. “I need to be calm strong-willed.”

Locals believe that the historic settlement of Bode was close to Nilbarahi Jungle of the Malla era, some 12 kilometers from Kathmandu.

When the evil spirits of Nilbarahi started tormenting the Bode folks, the whole village shifted to the current location. However, the evil spirits continued to torment the Bode folks even in the new settlement. To prevent the spirits form entering into their village, the villagers blocked all four entry points of Bode with invisible walls with the help of a religious scholar. Later, an evil spirit that tried to enter into Bode got stuck at one of the entry points.

The captured evil spirit was paraded throughout Bode with his tongue pierced. He was freed only when he made a promise that he would never cause trouble in Bode.

“Since then, Bode is free of drought, deadly earthquake, famine and epidemic,” says Juju Bhai. “Even the deadliest quake of 1934 AD damaged just two houses in Bode.”

Juju Bhai and all the Bode folks believe that they have managed to protect their village from deadly natural disasters by continuing with their centuries old tradition.