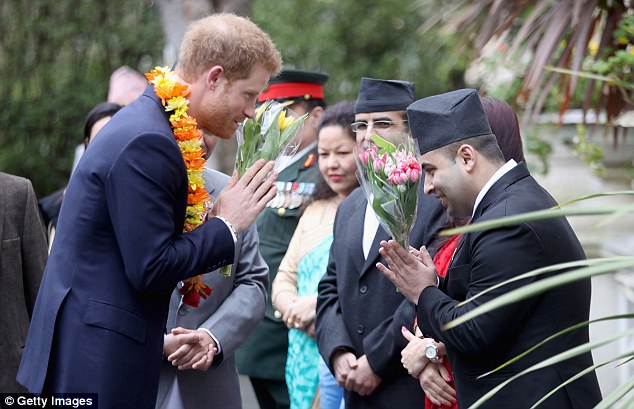 Prince Harry donned a colourful flower garland today at a ceremony celebrating 200 years of co-operation between the UK and Nepal.

Harry, 32, made a speech and met Gurkha families during the event at the Embassy of Nepal, in central London, on Monday, which marks the end of celebrations for the milestone.

It comes one year after Harry made his first trip to Nepal – a visit which coincided with the bicentenary of the signing of the Treaty of Segauli in March 1816.

The treaty established formal relations between the south-east Asian country and the UK.

During his visit to Nepal, the Prince travelled to regions affected by the 2015 earthquake and the British Gurkha Camp at Pokhara to honour soldiers killed in action.

Gurkha troops have served alongside British forces for more than 200 years and the Prince served with the 1st Battalion The Royal Gurkha Rifles during his tour of Afghanistan in 2007 to 2008.

Last week, Harry teamed up with his father Prince Charles to honour Gurkha soldiers who helped to secure key sites in Afghanistan at a Buckingham Palace ceremony.

The Prince of Wales, Colonel-in-Chief of the Royal Gurkha Rifles, and Harry, 32, who both have long-held links with the Gurkhas, presented them with Operational Service Medals.

The soldiers are among 300 members of the 2nd Battalion, Royal Gurkha Rifles (2RGR), who were deployed to Kabul last year as part of Operation Toral, the UK’s mission to help Afghanistan take control of its own affairs. 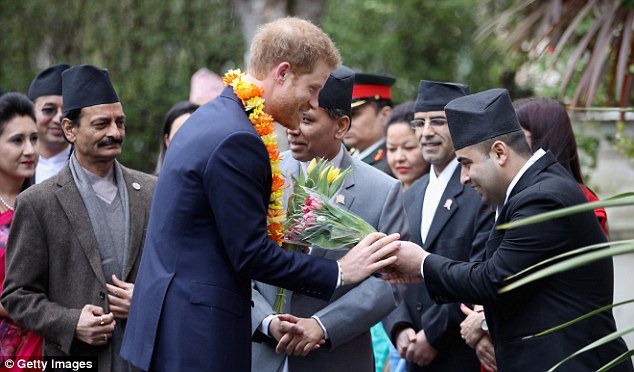 Advising Afghan ministers and senior officials on security issues and mentoring instructors at the Afghan National Army Officers’ Academy were among the tasks they completed.

The 2nd Battalion The Royal Gurkha Rifles were seen marching into Buckingham Palace ahead of today’s medal presentation.

The battalion has been crucial to the Kabul Security Force which helps establish a bubble of security in and around the city centre protecting advisers and other coalition personnel.

For two centuries, Gurkha soldiers have served alongside British forces in every major conflict, gaining a reputation for bravery and loyalty.

During the two world wars there were more than 40,000 Gurkha casualties, and 13 Victoria Crosses have been awarded to Nepalese Gurkha soldiers. 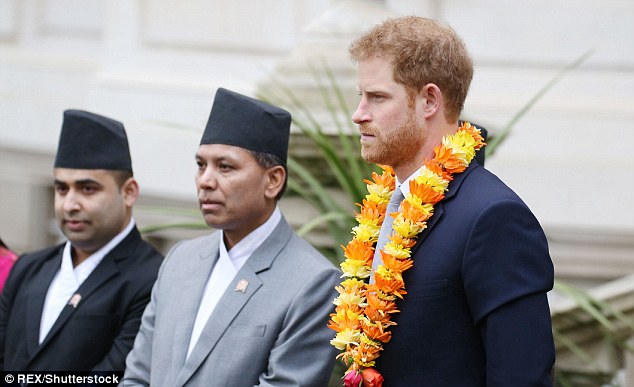 Charles’s links to the Royal Gurkha Rifles dates back to 1977 when he became Colonel-in-Chief of the 2nd King Edward VII’s Own Gurkha Rifles (The Sirmoor Rifles).

Royal connections with the regiment began 101 years earlier in 1876 when the then Prince of Wales was the first colonel-in-chief.

Harry visited the 2nd Gurkha Rifles with his father on Sailsbury Plain in 1990.

Harry served with the 1st Battalion The Royal Gurkha Rifles during his tour of Afghanistan in 2007-08. He said that ‘when you know you’re with the Gurkhas, there’s no safer place to be’.

It has been an action-packed week for the royals, who gathered in London yesterday for a Commonwealth service at Westminster Abbey.

Harry and Charles joined the Queen, along with Prince Philip and the Duchess of Cornwall while his brother William enjoyed a skiing holiday with friends in Verbier, Switzerland.