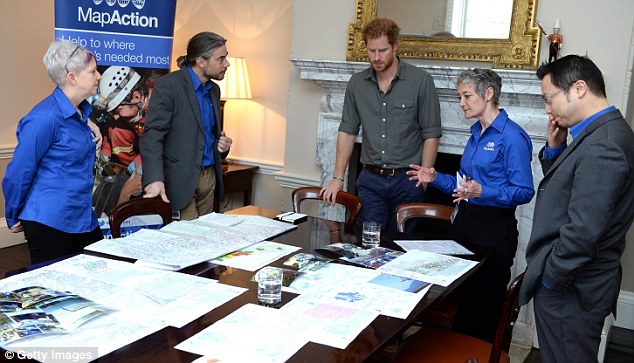 Prince Harry has spoken of his determination to help rebuild Nepal after last year’s devastating earthquake. The 31-year-old was speaking ahead of his first official trip to the country this weekend which he hopes will ‘shine a spotlight’ on the issues that still need addressing. The royal said: ‘Everyone is aware of it when it happens, the media is on it, there’s a huge amount of interest and then before we know it everyone is onto the next thing.

‘Hopefully by doing this trip it will shine a spotlight back onto the issue and people will realise there is still a hell of a lot that needs to be done.’
The fifth in line to the throne was speaking as he attended a briefing by MapAction – which uses skilled mapping professionals, almost all volunteers – to help co-ordinate the emergency response in the aftermath of a natural disaster.

Harry has been royal patron of the charity, which has undertaken 59 emergency missions across the globe so far, since 2007.
During the meeting at Kensington Palace this morning he was briefed by glaciologist Hamish Pritchard, a volunteer with the charity, who happened to be working in Nepal for the British Antarctic Survey when disaster struck on April 25.

He described walking through the streets of the capital Kathmandu and seeing the devastation first-hand, just minutes after it happened. This enabled him to start collating information for his Map Action colleagues who jumped on the first flight out there. ‘I can’t begin to imagine what that would have been like, especially in a place like that,’ Harry said.

The earthquake, which had long been anticipated, claimed more than 8,000 lives. A further 21,000 were injured and hundreds of thousands of people left homeless.
It was the worst natural disaster to strike Nepal since the 1934 and also resulted in the destruction of dozens of centuries-old buildings, particularly in the Kathmandu Valley.

The earthquake also triggered an avalanche on Mount Everest, killing 21, and making April 25 2015 the deadliest day on the mountain in history. Harry, dressed casually in chinos, desert boots and an open-necked shirt, appeared to have been well briefed by the charities who are helping to facilitate his forthcoming trip.

‘The charities say that there is no good time to rebuild after something like this. The rains comes and everything gets washed away,’ he said. He also appeared impressed at the detailed amounts of data that MapAction were able to pull together so quickly in the aftermath of the disaster, spread out in front of him on the table.

‘None of these obviously existed before Map Action got out there? So wherever you are, whatever you are doing, you drop everything and get out there?’ he said. ‘I hear there was no damage to the airport which people say was a miracle.’ He added: ‘The impression I get is that it is organised chaos in the aftermath of a disaster and then a massive lull before the kicking into gear of the next phase, which is understandable.’

Turning to the MapAction team he said: ‘Thanks to you guys for all you have done and the more people that can find out and use MapAction to its full potential the better. Harry will visit Nepal for the first time on behalf of the British Government between Saturday March 19 and Wednesday March 23. The visit will support British interests in the region and highlight the broad and deep relationship between the UK and Nepal. This year is the bicentenary of bilateral relations between the two countries. The prince has asked to meet as many Nepali people as possible.

An aide said: ‘He has a huge amount of admiration for the resilience of the people of the country, particularly in response to the earthquakes last year. During the visit he will learn how the country has been recovering over the last 11 months.’ Harry will also be introduced to the home of the Brigade of Gurkhas, saluting the extraordinary bravery and commitment that Gurkhas have shown in the last 200 years.
‘This will be a particularly important moment for him, having such a huge amount of respect for Gurkha soldiers, and having known members of the Gurkhas who have sadly been injured in recent conflicts,’ a spokesman said.

His visit will also take in meetings with the Nepali Prime Minister, K. P. Oli, and Foreign Minister Kamal Thapa and Nepal’s first female President, Bidya Devi Bhandari, Nepal’s, at Rashtrapati Bhavan, the Presidential Palace in Kathmandu. His first full day of engagements will be in Kathmandu and will focus on the devastation left by the earthquake, particularly to the city’s ancient temples and monuments.

The prince will then travel on to Bhaktapur, about 45 minutes’ drive from Kathmandu, where he will visit a pre-positioning site for emergency supplies.

The facility, which is run by the Nepal Red Cross with funding from DFID, provided assistance to 800 households during the initial 24 hours after the April 2015 earthquake.

The supplies, which have since been replenished, include emergency shelter kits, water and sanitation equipment, and household items.

From the site, Prince Harry will then travel on to visit a temporary camp for families displaced by the 2015 earthquakes. The site currently houses around 250 people, a quarter of whom are children, and Harry will have an opportunity to hear for himself about their experiences.

He will then travel on to experience the beauty of the Bardia National Park which, together with neighbouring Banke National Park, forms the largest tiger conservation area in Asia.

At around 1000 sq km of forest and grassland, Bardia is also home to wild elephants, rhinos, crocodiles and more than 250 species of bird.
Efforts to reduce poaching in the Park have employed smart-phone technology, which allows real-time patrol data to be transmitted to a control room.
During his visit, Prince Harry will have an opportunity to experience rafting on the Khauraha River and view tiger camera traps in the jungle.

In this breathtaking environment, he will see how Nepal’s natural bounty is being carefully opened up to visitors, so that conservation efforts and tourist revenue can become self-reinforcing.
His trek will end in a remote hamlet in the hills where Prince Harry will enjoy a cultural show organised by local people, before watching the sun set over the Himalayas.
He will spend the rest of the evening at a Gurkha homestay, where he will stay overnight.
After watching sunrise over the Himalayas, the prince will visit a school affected by the earthquake and now being helped by the Gurkhas before travelling onto the British Gurkha Camp at Pokhara.

Each year 240 Nepali young men are selected to join the British Army, following a highly competitive and rigorous series of physical and mental tests.

The visit concludes in Kathmandu where Harry will open the Nepal Girl Summit which will highlight the promotion of gender equality in Nepal, in particular by encouraging moves to end child marriage.

It is estimated that among Nepali women aged 25- 49, more than half were married before the age of 18. Around one in 4 Nepali women have given birth before reaching 18 years old and suicide is the leading cause of death among married women of reproductive age.

He will also visit the Kanti Children’s Hospital in Kathmandu, where he will meet young people being treated in the hospital’s Burns Unit.