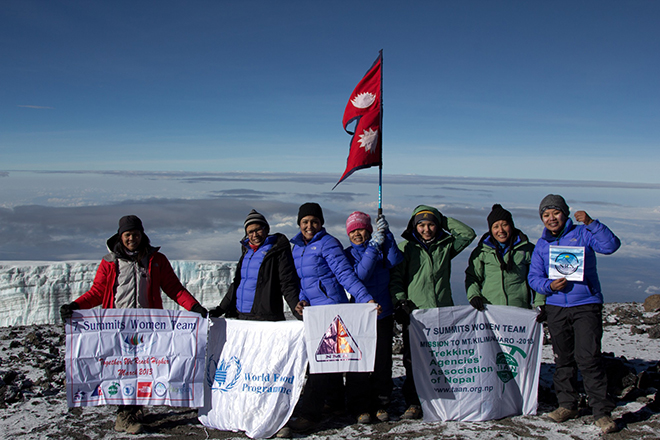 KATHMANDU:- Seven Summits Women Team, the first-ever female team in the world to set new record, and team have hoisted Nepalese national flag atop all the peaks they conquered.

The team members arrived in Kathmandu on 9th December after scaling the ‘Vinson Massif’ of Antarctica as the last successful venture.

The youngest member of the team Nima Doma Sherpa, Maya Gurung and Pemadiki Sherpa successfully scaled the seventh peak. However, team coordinator Shailee Basnet, Ashakumari Singh and Purjan Acharya could not climb the peak due to financial crunch on December 23, 2014.

Team coordinator Basnet said that the entire team members were delighted after scaling victory over the tallest peaks.

Likewise, Pema Diki Sherpa shared that they scaled the peak in Antarctica by struggling in the temperature of minus 30 degree Celsius.

“Vehicles too ply over the snow in Antarctica. It was a fun to roam around by riding vehicles on the snow,”

Likewise, expeditor Nima Doma Sherpa said that they were delighted to have spread Nepal’s name in the world by scaling the peaks even though the job itself was challenging.

Singh has something different to share. She said less support was received in the developed nation though a hefty amount was needed to accomplish the goal.

Maya Gurung recalled her experiences saying that the conservation of the Himalayas in the developed nations was praiseworthy adding that even the renowned expeditors too should be punished for throwing garbage in the Himalayas.

The team that set its journey with the slogan of ‘Education, Environment and Empowerment’ faced lots of troubles, mostly financial, during the venture.

The total cost of the expeditions crossed nearly Rs 100 million–the highest in Antarctica with Rs 20 million.

The team is now planning to offer training to the aspirant climbers.
source:ekantipur.com