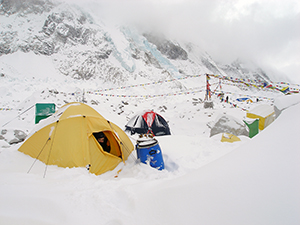 KATHMANDU: Incessant snowfall at the Everest Base Camp has started affecting climbing activities and is taking a toll on mountaineers, officials and doctors stationed there said.

“Weather condition is not normal with the base camp witnessing snowfall for the last three days,” said Krishna Lamsal, Under Secretary at the Ministry of Tourism and Civil Aviation. Lamsal, who leads a team of government officials at the base camp contact office, also informed over phone that nearly 500 persons, including climbers and their support staff, have already arrived at base camp. “Continuous snowstorms and fluctuating weather this spring season have affected climbing activities as a whole,” he said.

A medical centre set up at the base camp has received more than 80 patients in the last one week, Dr Sanjeeb Bhandari, who is stationed at the base camp, told this daily over phone. “In the first couple of days there were only four-five visitors to the centre, but now more that 15 mountaineers have been complaining of altitude sickness on daily basis,” said Dr Bhandari, adding that the illness can be classified into acute mountain sickness, high altitude pulmonary edema and high altitude cerebral edema.

“Three foreigners have been airlifted to Kathmandu for further treatment while five mountaineers, including two Nepalis, have been sent down to the Feriche area after preliminary treatment,” Dr Bhandari said. Himalayan Rescue Association has stationed a small medical team running a health centre at the base camp for a week. Earlier, Mingma Tenzing Sherpa of Namche died due to HAPE on April 1 while working at the base camp.

“Three liaison officers from the ministry and 16 support staff have been providing necessary support to the climbers at the base camp,” Under Secretary Lamsal said, adding climbers acclimatise at base camp for several days before heading to summit to reduce the risks and severity of high altitude sickness. According to Tilak Pandey at the Department of Mountaineering, this year 85 expedition teams have been issued permit to climb different mountains. A total of 334 mountaineers (87 from the US) representing 31 teams are headed for Mt Everest.