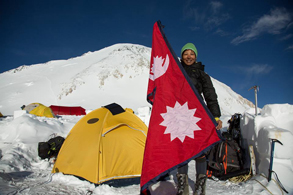 Susmita Maskey at Mt. Denali with her national flag.

Kathmandu: To experience the apex of a mountain is a dream for millions of people, climbers and poets, collectively, all over the world. Susmita Maskey apparently is in the hot-spot to receive envious rays from wide range of mountaineers and climbers because, in contrast to this tough dream, she has climbed six different highest peaks from six different continents, respectively.

Mt. Denali is her latest success received on 23rd June 2014. Susmita Maskey is also a social activist and motivational speaker. When she went to Everest for the second time, she attributed her record to slogan- “Extreme Sports for Gender Equality-Everest Expedition 2011 Spring.”

She will climb the final peak Vinson Massif (Antarctica) end of this year.