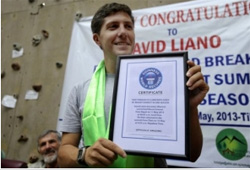 KATHMANDU: A veteran Mexican climber was confirmed on Thursday as the first person to climb Everest from both sides of the mountain in the same season.
David Liano Gonzalez, 33, reached the top of Everest on May 11 from the south side, and days later started his second successful ascent of the world’s highest mountain from the north side.Gonzalez, who says he has now climbed Everest five times in total, was awarded the official record certificate from Guinness World Records at a ceremony in the Nepal capital on Thursday. Continue Reading→