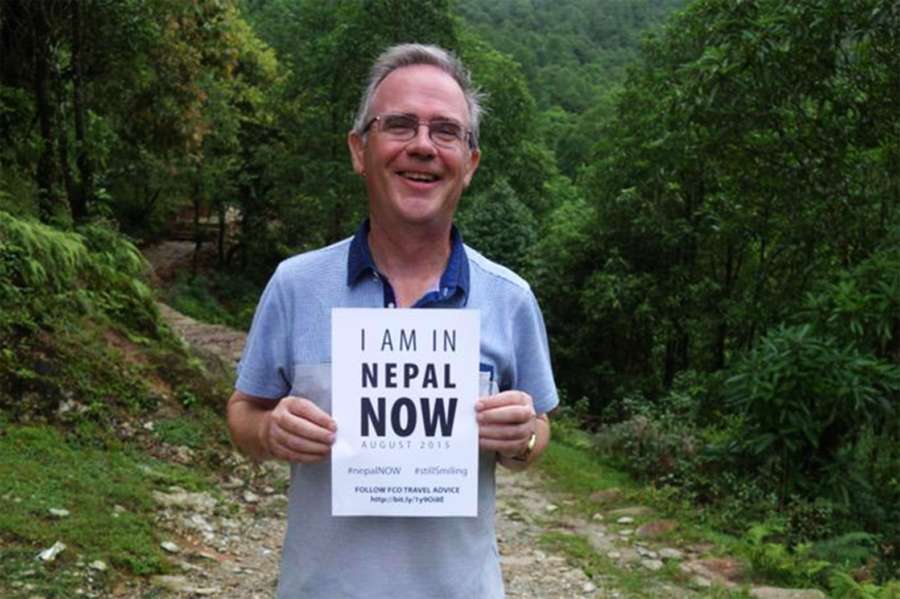 With an aim to promote Nepal’s tourism, which is staggering in the wake of the April 25 earthquake, top British diplomats stationed in Nepal on Saturday embarked on a trekking in the Annapurna region.

British Ambassador to Nepal John Rankin and ‎Head of DFID Nepal Dr Gail Marzetti started their trekking from Dhampus, near Pokhara, of Kaski district this morning.They held placard that reads:“I am in Nepal now August 2015#nepalNOW #stillSmilingAlso, they recorded video messages encouraging people to visit Nepal and support the Himalayan nation’s tourism.“This morning I am trekking in Nepal, in the southern Annapurna region. It’s been a beautiful trail and I enjoyed the walk,” Ambassador Rankin said in his video message. He further suggested the visitors from the UK to follow the FCO travel advice.“Some areas after the 25th April earthquake are of course still unsafe,” he added,” But most of the country is now open for people to come and visit. It is very important for the economic recovery of this country that tourism should revive. So stay safe and come and enjoy Nepal.”Likewise, Dr Marzetti said, “So here I am, trekking in Nepal. It’s not been a great morning, there’s a very misty cloud covering the great Annapurna range, but in September it will be different and it will be fantastic.”“Do come to Nepal for two reasons– one is to have the holiday of a lifetime. And the second, is to support the Nepali recovery after the earthquake,” she is heard saying in he video message, “We in UKaid have been supporting the people with their home stays, their businesses and their jobs out in the remote areas. And if you come as tourist that would really help Nepal.”source: the himalayan times,15 august 2015