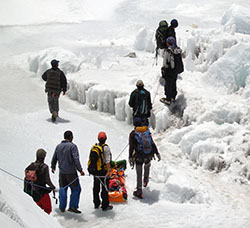 KATHMANDU: The government today agreed to honour the permits issued to scale Mt Everest this season for up to five years.

A high-level joint team led by Minister for Tourism and Civil Aviation Bhim Acharya announced at a meeting with the agitating mountaineering support staff and guides at the Everest Base Camp that the permits issued to mountaineers this season would be valid for five years.

“We have appealed to the sirdars, climbers and guides, among other stakeholders, to continue climbing, expressing commitment to address their demands,” Joint Secretary of MoTCA Madhu Sudhan Burlakoti said.

But South African climber Saray told THT from the base camp that today’s development effectively meant that their expedition was cancelled. “Since we are well acclimatised we might try to scale another mountain,” Saray said.

Lakpa Sherpa, a medical staffer at the base camp, told THT over phone that though the government claimed the mountain was open for climbing it certainly was not safe for any of the climbers to attempt it this year.

After the meeting that lasted half an hour at a camp set up by SPCC, most of the climbers and support staff decided to abandon the climbing.

Though a few Sherpas and foreign expedition team leaders want to continue climbing, most Sherpas are not mentally prepared for the same, a member of delegation told THT.