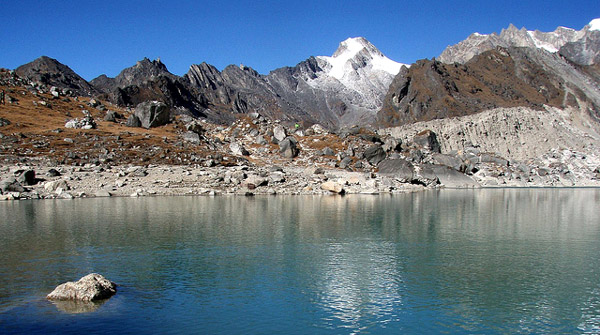 One of the unique aspects of the landscape in the Himalayan region is the presence of a number of lakes that have a milky sort of color on account of the glacial silt prevalent at high altitudes. These are known as dudh kunds (milk lakes) and all of them are sacred to Hindus. Two of the better known ones are Gosainkunda and Tilicho. Gosainkunda (4,315 m) is in the Langtang region while Tilicho (4,949 m) in Manang District, is claimed to be the highest lake in the world. A less well known dudh kund is to be found in the southern region of Solukhumbu District at a height of 4,561 m, west of Lukla and in the shadows of the Nimbur Himal. This is where we we’ll be trekking to today.

Generally, it will take you 10–12 days to reach there from Kathmandu; however, you can also do it in half the time if you’re in a tearing hurry. The best time to go is in October–November because that’s when you get the best views. At the same time, since it’s a religious site, if you go there in August, during the Janai Purnima festival, you’ll get to see a carnival around the lake on account of hundreds of pilgrims converging on the site to take a holy dip. Then, high caste Hindus will be changing the holy thread (janai) they wear around their bodies. 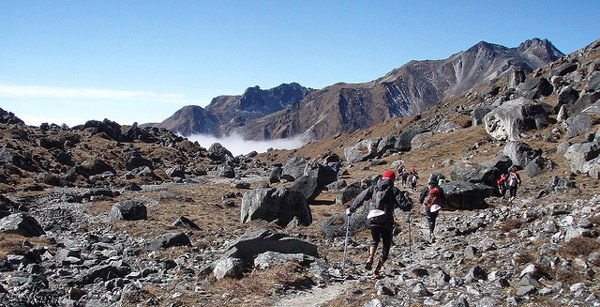 The trip begins with a flight to Phaplu (2,469 m); it’s as exciting a flight as the one to Lukla. Of course, you know that Lukla has the distinction of featuring in the top 10 list of most dangerous flights in the world! Actually, it’s more about the landing than anything else that’s a bit of an adrenaline rush in both Phaplu and Lukla. Anyway, once you have a safe landing on the Phaplu airstrip, you begin your trek straight away to Ringmo (2,720 m), passing an excellent viewpoint, Ratnagi Danda (3,000 m), and Chiwong Monastery (2,743 m) on the way. Admire the magnificent mountain scenery, it’s really spectacular. You stay the night at Ringmo.

The next day you start off for Sarsar Beni (3,800 m), a high yak pastureland. It’s a tough day’s walk since you’ll be walking up more than one thousand meters in a matter of some 10 hours. Actually, the fact is, this trek we are on right now, it’s a sort of fast trek. Generally, trekkers can take it easier and walk at a more leisurely pace which means that you could walk up to Sarsar Beni in two, or even, three days. That would no doubt make this trek more to the liking of most trekkers. And, in fact, it’s better to walk up slowly since you need to acclimatize yourself to high altitude. The expert recommendation is that 500 m per day is what you should be doing, and even less the higher you climb. Otherwise, you know, there’s this deadly thing called acute mountain sickness which can be fatal.

Trekkers on the way to Dudh Kunda. Image: flickr/akunamatata

However, we‘re in somewhat of a hurry, so we are taking some chances, which is of course a foolish thing to do. Anyway, this steep climb is pretty much an exhausting one, but your fatigue is somewhat alleviated by the fantastic views you get from some of the ridges on the way up. You set up camp at Sarsar Beni for a much needed night of rest and recuperation. The next day, after a heavy breakfast, you start climbing again, this time you climb about 760 m to get to your goal, the sacred Dudh Kund. On the way you’ll come across a side trail that goes to a pond called Kalo Pokhari (Black Pond). According to local belief, you can’t have a look at it on the way own after you have had a darshan of the Dudh Kund. So, that means if you want take a peek-a-boo at Kala Pokhari, then you got to do it on the way up.

It is claimed that the Dudh Kund is pretty much low and slightly dark until the full moon day comes around in August, when it suddenly fills up and becomes milky white in color. The high Himalayan peaks of Numbur (6,959 m) and Karyalung (6,681m) tower over the Dudh Kund, making the whole setting into something straight out of a fairy tale. Having had your fill of the scared lake and the magnificent setting, you trek down to Junbesi (2,675 m). On the way, you pass through rich pasture land and over a ridge called the Pare Danda (about 4,500 m); should take you around two hours thirty minutes to three hours. From here, the views are something else, spectacular panoramas of the Himalayan range that will leave you gaping. The walk from then is at first along the ridge line, then it’s all downhill right to the Sherpa village of Junbesi which has a number of famous monasteries, including the Thubten Cholin monastery. You spend the night here and take out some time visit the monasteries. The next day, you carry on walking downhill to the Basa River and from there to the small town of Beni. Have a well-deserved lunch here before walking uphill again to Phaplu from where you take a flight back to Kathmandu. 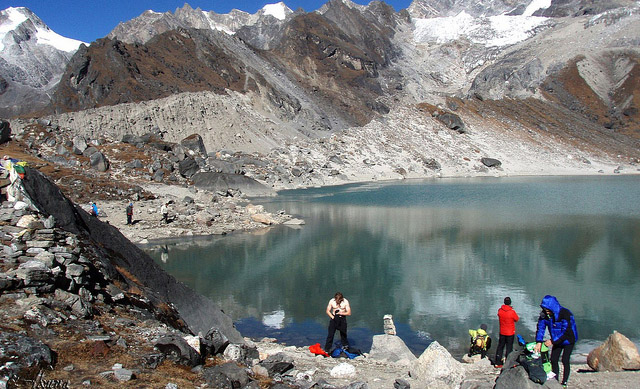 As said before, this trip we are talking about, well, it’s a sort of fast track trip. More normal is taking 10 to 12 days to complete this trek, in which case, the itinerary goes somewhat like this:

Day 12—fly back to Kathmandu