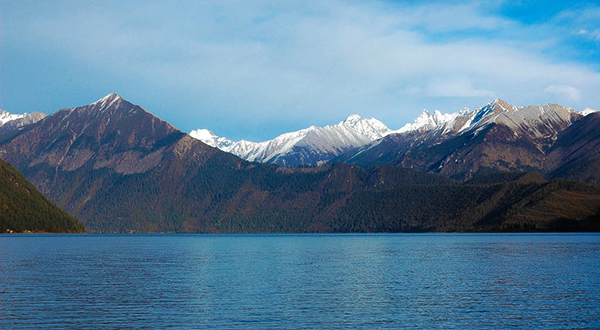 Your travel to Tibet is not complete without a visit to the vast region known as Kham, home to the legendary Khampa warriors of yore.They have often been likened to the cowboys of America, and this likeness is all the more pronounced by their fondness for wearing flamboyant cowboy hats and hardy leather boots, in addition to the fact that they are skilled horse riders. Aptly, Kham could well be said to be America’s Wild West of yore. Kham comprises of the eastern part of the Tibetan Autonomous Region (TAR) and parts of western Sichuan, northwest Yunnan, and Qinghai in China.

Kham is a vast area known traditionally as Chusi Gangdruk (‘four rivers and six ranges’). While you might think that your Tibet travel will probably consist of touring large expanses of dry and arid areas, a tour of Kham will be a pleasant surprise. The region’s ecology is varied, with lush tropical forests, raging rivers, and of course, arid areas too. The forests and their lushness is due to the fact that four rivers, including three great Asian rivers, Mekong, Salween, and Yangzi, flow through it, the fourth one being Yalong. The lushness can also be attributed to the area receiving abundant rainfall during the monsoon season from June to September. Indeed, you will be surprised by all this, since the climate here is so different from the generally dry and arid climate in the rest of the TAR. Oh yes, Kham gives a twist to your travel to Tibet.

Kham is made up of 50 counties: 25 in TAR, 16 in Sichuan, 6 in Quinghi, and 3 in Yunnan. Some 14 ethnicities inhabit this area although the population is pretty sparse. Among these, the Khampas are the best known, specially taking into account their flamboyant lifestyle and their place in Tibetan history as the ones to show a strong spirit of rebellion and demonstrate a fair degree of resistance to frequent invasions, including the Chinese invasion in the late 1950s. Concerning other inhabitants of the area, that is, wildlife, Kham has quite a variety, and more rare animals and plant species than elsewhere in the TAR. Animal wildlife include Himalayan tahrs, red pandas, takins, musk deer, long-tailed leaf monkeys, gorals, tragopans, a range of Himalayan pheasants (including monals), etc. As for the botany of Kham, you’ll find a wide variety of wildflowers: almost 200 species of rhododendrons, more than 100 species of gentians, and close to 120 species of primula. Keep a sharp eye out when walking through Kham’s jungles during your travel to Tibet, you may be lucky enough to espy the rare blue poppy. It would be advisable to keep this on your agenda when making up your list of things to do in Tibet.

Another item on your agenda of things to do in Tibet is a visit to the beautiful alpine lake known as Draksum-tso (3470 m; a.k.a. Bagsum-tso and Pasum-tso), which you can reach after a day’s drive from Lhasa and a 41-km hike from the Sichuan-Tibet Highway. This lake, surrounded by lofty 6000-meter peaks, is associated with great religious significance, the Guru Rinpoche having once resided there. On a lovely island on the southern shore that’s full of lovely flora is situated the 14th century Tsodzong Monastery (The Fortress of the Lake). Charming monastery, idyllic location. There’s also a viewpoint over the lake that you get to by climbing wooden boardwalks. You can take a two-day kora (circumambulation) around the lake, in which case you get some pretty healthy and refreshing hikes. Another fascinating lake is the Rawok-tso in Rawok, one of the remotest areas of Tibet. It and its sister lake Ngan-tso, are turquoise in color and you get to see beautiful sunrises from here.

You’ll find Tibet’s largest and most ancient Bon monastery, Tsedru Monastery, when on the way from Riwoche to Tengchen towns. Its setting is what gets you at first sight, situated as it is on a ridgeline under natural cliffs and caves, over which one can see flying, soaring eagles and vultures at times. This is because of the sky burials conducted regularly in the valley below. At the monastery itself, you’ll be climbing up wooden ladders to visit shrines located on cliff tops. You’ll find many other smaller monasteries along this route, including Jinkar, Rotung, Nyamaling, Gongsar, Lharu, and Langtang Monasteries. While on this subject, there’s a pretty interesting shrine called Lamaling some 30 km from Bayi that’s believed to be shaped like Guru Rinpoche’s heavenly paradise. A temple of the Nyingma order, it houses more than 100 monks and nuns today. In the same vein, there’s the Galden Jampaling Monastery overlooking Chamdo that has around 1000 monks residing in it, making it the largest community of such people in any monastery in Tibet. This should be another must-visit thing in your list of things to do in Tibet when you travel to Tibet.

Traveling across eastern Tibet is a fascinating experience, what with the altitude, the magnificent alpine lakes, the diverse scenery, the exotic flora and fauna, and the many, many, monasteries. You can take a long trek (around 14 days) or a shorter one (6 days) starting from Lhasa. The former takes you through Draksum-tso, Bayi, Pasho, Riwoche, and Sok, while the latter takes you to Bayi, going through Draksum-tso, Bayi, Miling, Gyatsa Xian, Tsetang, and Samye. No matter how long or short your Tibet travel is, do make it a point to visit Kham to experience the wonders of eastern Tibet.